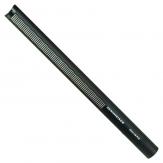 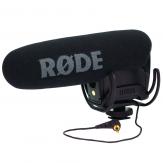 The internal microphone of the camera is usually an omnidirectional microphone of low quality that catches all the sounds that surround you - both necessary and not needed. Not the best option for professional dubbing of films ... Therefore, in this subcategory we live - Boom microphones "Microphones-guns". They are directional and catch a sound that sounds strictly ahead, discarding sounds that sound on the sides. Thanks to this, the boom mics are most suitable for most filming in the film industry.

The features of directional microphones include:

Also, the boom mic is convenient to use: it can be connected directly to the camera or to an audio recorder, and give it to a sound engineer who will keep it just above the frame border. On-camera directional "microphone-gun", usually used in sequential shooting.

Although it is worth noting that if possible, it is much better to bring the microphone from the camera closer to the object: on a stand or, if there is an assistant, on a microphone fishing rod. An assistant stands with her, trying to hold the microphone so that it is as close to the character being shot, but does not get into the frame. This option requires an assistant, fishing rod and many meters of good audio cable, so it is not very popular among fans. There are others: for example, if there is a presentation at the department, then the cannon can be put on it. You can combine the gun with the radio system. Boom mic are used in cinema, on television, in music studios - this is a very, very versatile type of microphone.

Some boom mic are phantom powered, while others are mainly powered by 9V crown. Phantom power eats up the charge on your camera and makes the microphone's design and weight easier.

Sports, reporting, broadcasting - the Sennheiser cannon microphone is exactly what you need. All models feature simple controls and very low inherent noise. So you will catch all the sounds that you and your audience might otherwise lose.

RØDE has many cannon microphones, including the popular VideoMic series of on-camera microphones, as well as their NTG gun microphones for higher-level sound recordings.