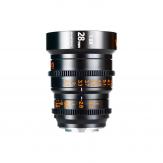 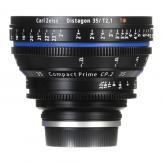 Here are placed lenses for video and film cameras

There are differences between film optics and optics for television cameras. Film lenses are used for staged video shooting - advertising, movies, clips. Television optics are used for reporting and filming news. The requirements for image quality and the functioning of optical systems are different. In movie cameras 35 mm, the picture is larger than in video cameras. It is projected on the image plane - in fact, on a 35 mm film section diagonally. In video cameras, a color separation unit and a CCD matrix are used to create the image.

Film lenses are divided into two types: discrete (with a constant focal length) and zooms (zoom). The operator controls the diaphragm and scales manually either manually or with additional servo control systems. They are intended, first of all, for filming from tripods, camera carts, cranes or systems “steadicam”.

The focus and aperture scales are well calibrated and remain in place with constant changes of position during filming. The best image quality is obtained using discrete film lenses on movie cameras. It has fewer lenses than in zoom lenses, so the glare, illumination and light absorption are at a minimum. Due to low-dispersion lenses, the value of refraction in film optics is extremely small. The result is a clear, bright and juicy image with saturation in black and excellent color reproduction even at the corners of the frame.

Color and geometric aberrations, parasitic effects and distortions are reduced to a minimum, there is no border around the edges of the object, which allows the use of chroma key. This greatly facilitates post-production and allows you to display a beautiful high quality movie on a big screen.